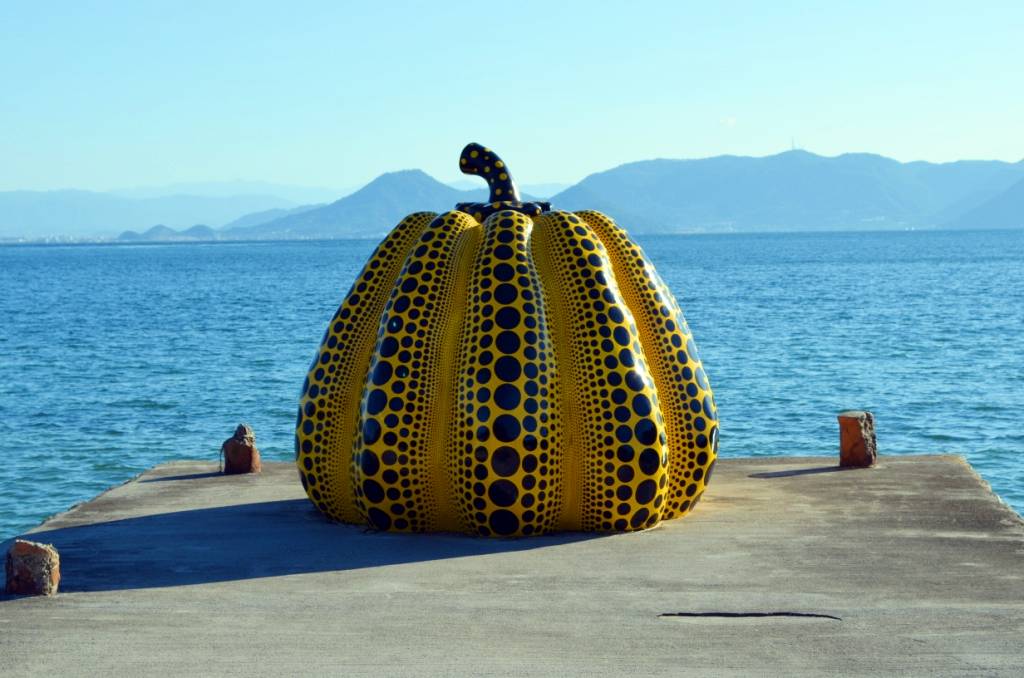 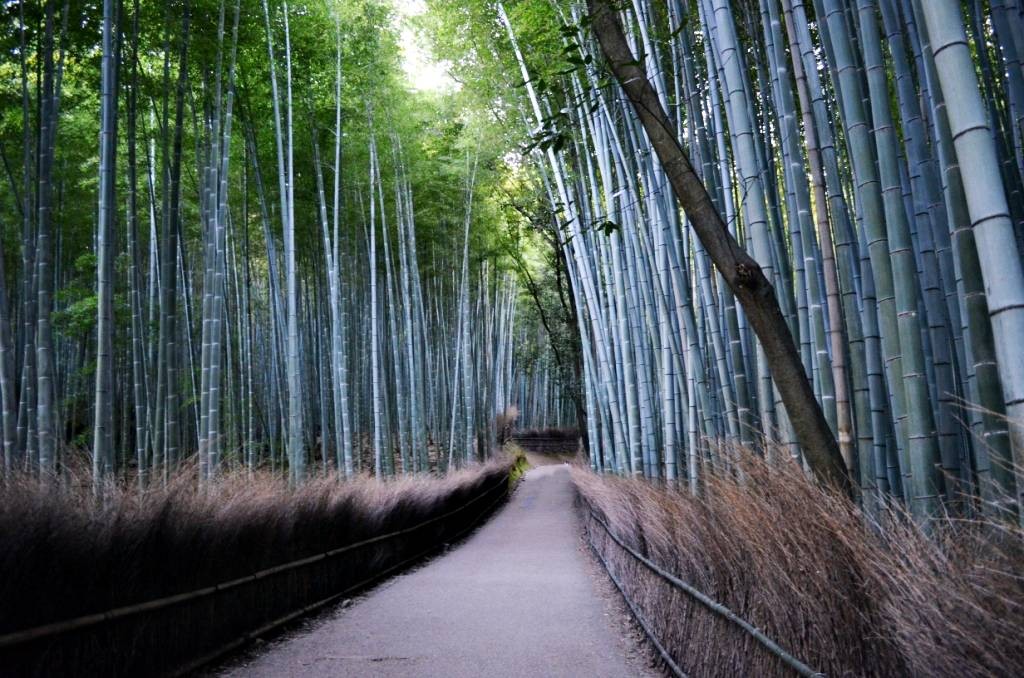 Last fall we had the wonderful opportunity to travel to Japan with my friend Chika and her partner Riley. She grew up in Japan, in Nara close to Osaka where her family still lives. You might have heard about her before as she’s a fantastic illustrator: Chika Ando Illustrations. The trip felt very Japanese indeed with only one at most two days in the same place. Her uncle has a condo in Osaka that we were able to use as a home base, which was so generous and lovely. I can’t thank Chika and her family enough, they really made us feel welcome and we got a real experience with the locals. I won’t be able to mention everything we did in those two weeks but I will tell you about the things that impressed me most.

Our first stop was Kyoto and I must say, it was also one of the most stunning places. Every city or area in Japan is known for something specific. Kyoto is known for its temples. The Golden Temple was so shiny. It’s covered from top to bottom in leaf gold and must be polished all the time. We walked through it’s picturesque park with koi carps swimming in ponds and little statues for different kinds of good luck. This was all the Zen I needed after the long flight and 15 hour time difference. 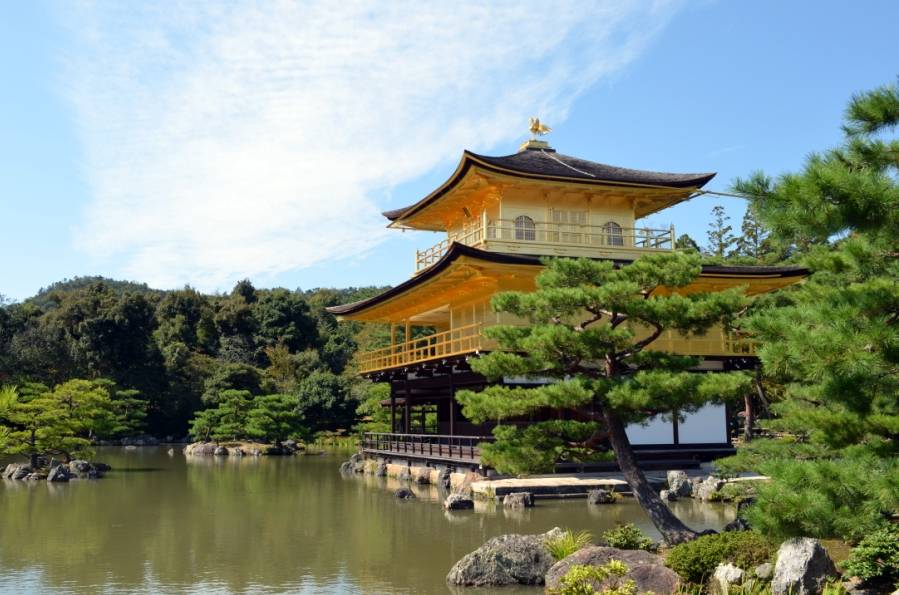 Japanese people take a lot of pride in their souvenirs and handmade gifts. Like everywhere else but even a little bit more so, it’s a good advice to never show up empty handed when you have been invited to something. We took the train to get from A to B and at one of the train stops in Kyoto, there were the cutest shops selling the cutest purses, pouches and handkerchiefs from the most adorable fabrics. Fun fact: There are no paper towels or hand dryers in public washrooms in Japan, everyone carries their own handkerchief. I really liked that idea because it’s so environmentally friendly. Just think of all the trees that get chopped down and energy wasted just because we’re too lazy to carry a handkerchief. Plus, they’re just too cute!

The next morning we stumbled upon a Hello Kitty! store and I didn’t want to leave. It’s so cheesy but also so darling. The Japanese are so good at so many things, but, oh boy, are they ever good at making the cutest things! And creepy things, especially cute AND creepy. 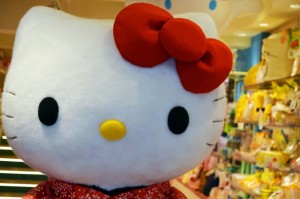 One of the things that were really memorable in Kyoto are the Toei Eigamura Film Studios. It really seemed to be a popular destination amongst Japanese people but we didn’t see many tourists there. We watched a ninja stage fight, went through a house full of ninja booby traps, hung out with a geisha and saw life sized anime figurine. Hell yeah! So if you want to go a bit off the beaten path, I highly recommend it.

One of the things that my husband really wanted to visit was Mount Fuji. But, oh no, it was the one rainy day of our trip and no Mount Fuji was visible when we arrived.

We stayed the night in a traditional hotel called Riokan. At first you think something is wrong with the room as there is no bed. And the chairs don’t have legs so you basically sit on the floor while having tea and later dinner. Dinner was an amazing affair with over 12 courses but all so small that we didn’t feel too full. After a relaxing soak in the natural hot springs, we really started to wonder where the beds were…they were futons in the wardrobe! The hotel staff would come to your room and set up the futons for you with an immaculate precision. Oh, sweet sleep!

As we were still in the grip of jet-lag, we got up at 5am and there it was: glorious Mount Fuji. Seriously, how can a mountain look so mountainy? 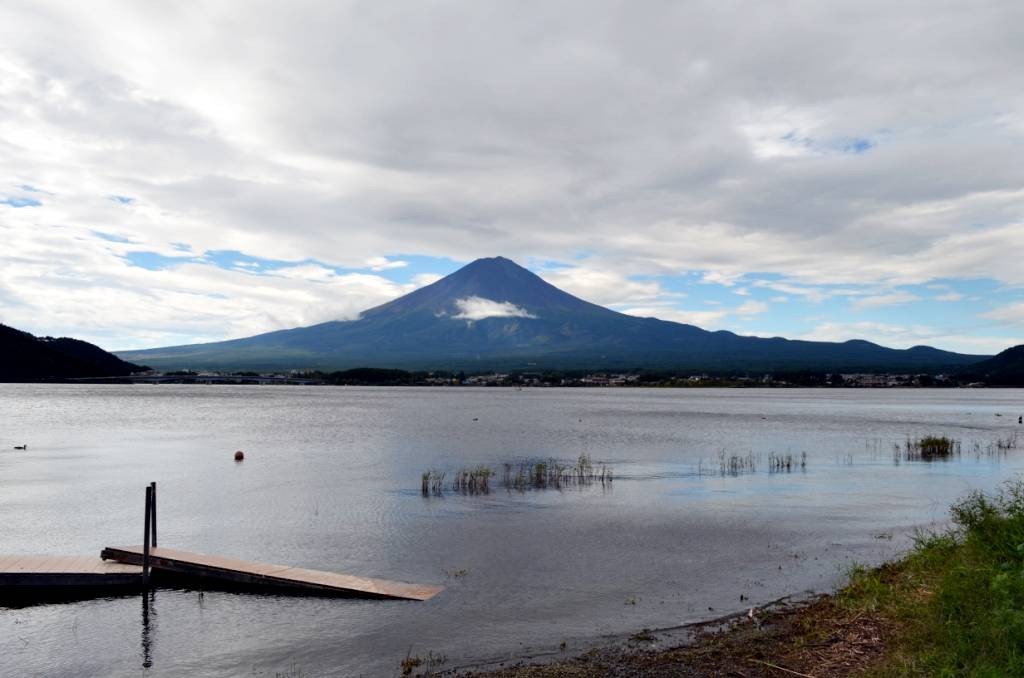 Our next destination was Tokyo. Oh, what a change of pace! While we were still enjoying the aftermath of our spa day in Fuji, the business and hectic speed of people in Tokyo came as a bit of a shock. It was an astonishing experience non-the-less. 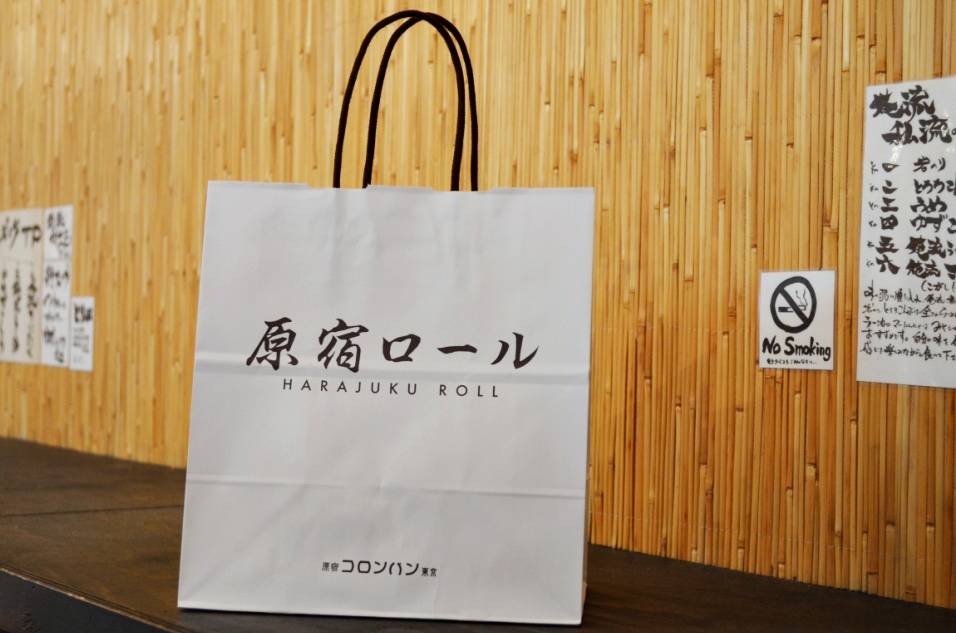 We ate at a Maid’s cafe where cute but pretty fake Japanese girls make you say weird things and sprinkle magic into your food before you’re allowed to eat it. Creepy men sit lonely at tables and seem to be regular customers and you (well, at least I did) just wonder how that can all be real. We walked through Akihabarar, the digital entertainment district, spent a long time in a 5 story cartoon/comic store and played fun games in a gaming arcade. I’m not much of a gamer but dancing to the rhythm of lights and playing huge drums are fun!

Of course I had to go shopping and try to find some indie stores. The Harajuku district is famous for its high end retail stores in buildings that look like a plaid shirt or as if a crack is going through its foundations. What I found most interesting though, was that it wasn’t all fancy-schmancy stores. We found a super cool tattoo parlour, a shop that sells uncountable stickers with designs of their resident artists, a store with the most beautiful hats ever (oh, so gorgeous!) and a couple of Kawaii-style boutiques that were rather a disappointment after all I had dreamed them up to be. Maybe I’m also too old to appreciate the value of tacky plastic pins that are clearly made in China.

One thing that was as fascinating as it sounds is the Tokyo Fish Market. This is where I had the freshest sushi in my life and found some gorgeous pottery. I’m a sucker for pottery, so how could I have left Japan without at least one bowl, two new tumblers and lots of gifts for friends and family? 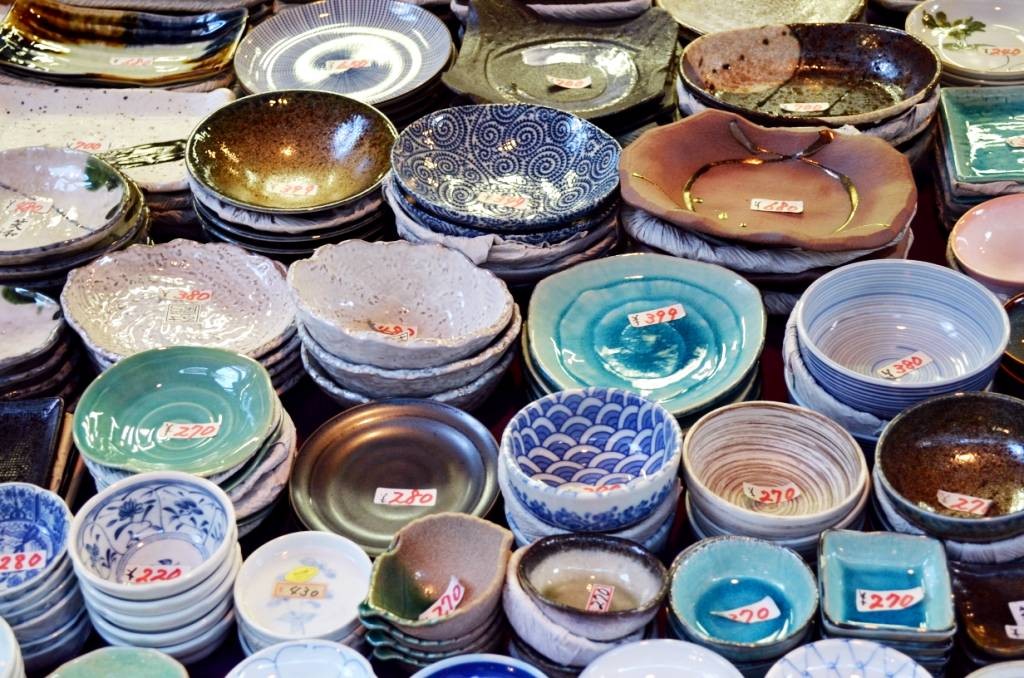 The fresh sea food, the spices, the weird dried fish from microscopic small to huge squid, I wanted to try them all and learn what they’re used for. But this was Tokyo and we wanted to see so much more!

Back in Osaka, we ate some more delicious food in the old, historical part of town where we stayed. Some nights we hit 2 or 3 restaurants just because we wanted to try them all and the beauty of Japanese food is, that it’s often isakaya or tapas-style food so it is actually a good idea to do some bar-hopping. 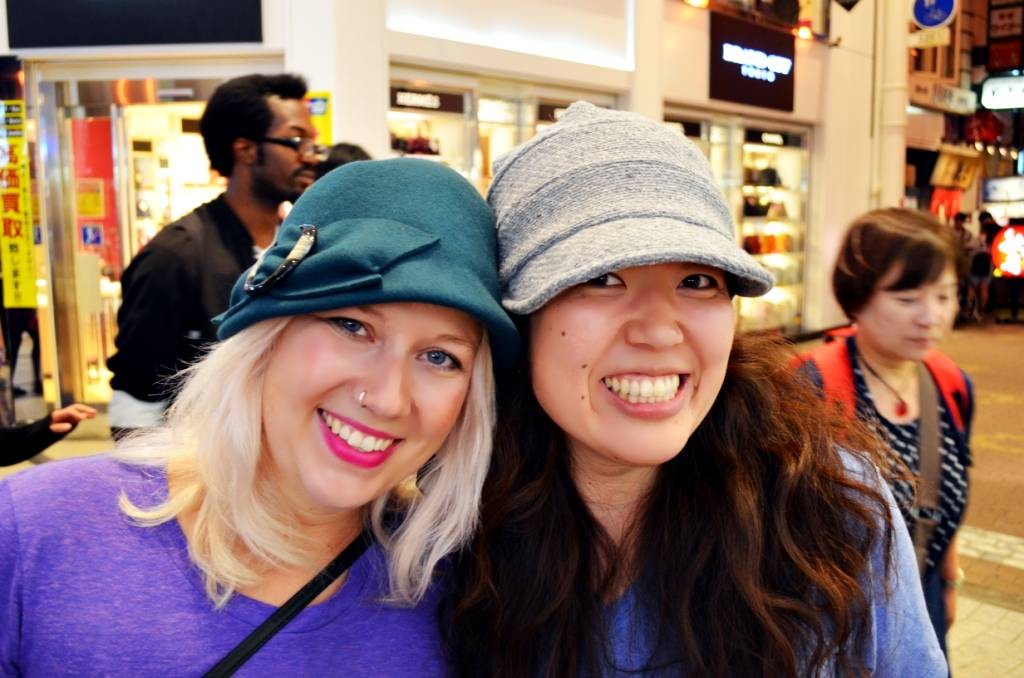 Chika and me and our new hats.
It was also in Osaka that we sang Karaoke after wandering around town with a couple of drinks. It’s allowed to drink outside and on trains, so that was very handy to get rid of my Karaoke-nerves. I didn’t have to be nervous at all though! Karaoke there is so different from the Western version. We had a room with a comfy couch, some rhythmic instruments and a big tv with a never-ending song-list all for ourselves. We didn’t take any videos as per my request which I definitely regretted afterwards. So there’s no proof of me and Guillaume giving an excellent rendition of Motörheads’ “Ace of Spades”. Maybe, just maybe, it’s also better this way…

If you’re into arts and I’m just assuming that because you’re reading my blog, you should save some time in your travel schedule for the island of Naoshima. 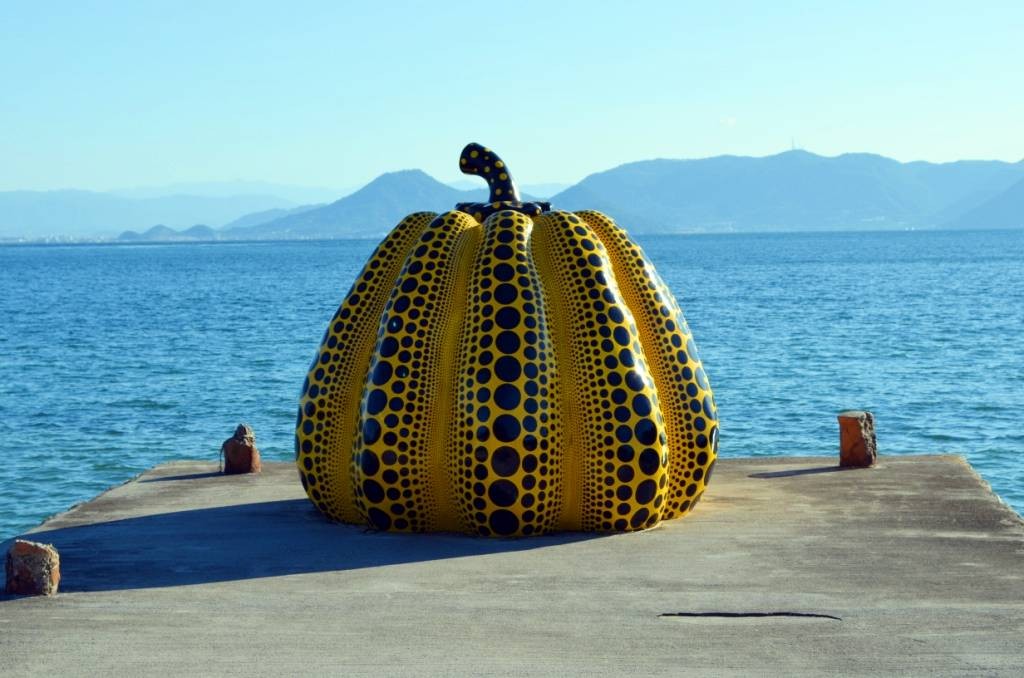 The island of Naoshima is an island dedicated entirely to the arts. There are numerous museums and exhibitions. You can take shuttle buses to get from one place to the next but they don’t go all the time and are sometimes very crowded. We didn’t know better so that’s what we did and unfortunately we couldn’t visit everything we would have liked to because we ran out of time as we had to catch the last ferry back to the mainland. Next time, we’ll definitely rent a bike and cycle around the island as we saw some people do. It looked like so much fun! There are also campsites where you can rent a tent, so maybe an over-night stay would be an interesting option as well.

I’ve been keeping the best for last: our visit at Chika’s parents. Her mom dressed me in one of her Kimonos which was such an honour! Kimonos are really expensive, so pretty and consist of a lot more layers that visible to the naked eye. They’re not comfortable to wear and I’m honestly impressed by how natural Japanese women can do everything in them with the two-toed socks and geta (Japanese flip flops). Then her mom held a short tea ceremony for us and explained it all afterwards. I really started to love matcha tea on that trip. The green colour is mesmerizing and a matcha latte is very scrumptious.

The rest of the evening was spent exchanging gifts. Chika’s mom and sister really loved the headbands I gave them and we just adore the hand-sewn quilted pouches and framed paper-art flower they made for us. Did I say earlier that the sushi we had in Tokyo was the best? Let me correct myself: the homemade sushi and roast beef-like dish with sesame sauce were a delight. Oh, I just couldn’t stop eating! Domo Arigato!

If you ever have a chance to visit relatives who live in another country or have a friend who invites you to go to their home country with them, do it. It will help you see so much more of that country than you would as just an ordinary tourist and make your trip so much more satisfying than travelling already is.